Mel is a Cavalier x Maltese who is  14 this year – We’ve had Mel from a puppy and she has always been a Mummy’s Girl.

She is very sweet natured, loving and laid-back dog –  and quite a couch potato.

Sophie Jane, 12 this year. Adopted 4 years ago from Queensland. Between the adoption fees, the flight costs to get her here, the dental, heart worm injection, and consults with a skin specialist and many vet visits trying to determine why her hair falls out consistently – we joke that at 3 kg’s now – Sophie cost us about $1,000 per kg. She is such a little terror (or terrier) though. Small dog – big attitude! She’s a real trouper too – and out-walks all of the other dogs. Is exceedingly proud of herself when she barks at a calf out on our walks – and it runs away! Banjo Jake (BJ) – 7 years old – and adopted from the Central Coast of NSW just over 2 years ago. I think BJ had a very torrid past, missing and broken teeth in the front of his mouth suggest he may have been kicked in the face at some point. He’s quite an anxious little fella who is frightened of males – particularly those who wear helmets, and even after two years does not like hands over the top of him especially while he’s in his bed. All the little girls seem to gravitate to BJ but they leave him a bit non-plussed! BJ had no idea what to do with girls – especially when they don’t lift their leg!!

Maisie Grace – At four years old – Maisie is just an enormous baby, still. First fostered from an animal shelter for another rescue 12 months ago, but very quickly adopted us!

There is absolutely nothing graceful about Maisie! She spends lots of time rolling around on her back – on the bed, on the grass, in the middle of the road and in the mud!! She has a big deep bark that frightens people but she is actually the most loving, sooky and affectionate of our crew. Maisie loves toys – and the more the merrier. She likes to make collections of them and will take them for a walk with her. She also likes sneaking up on the ducks (but will never have a career that involves stealth – she’s just not that good at it!).

Maisie embraces life and absolutely lives in the moment. 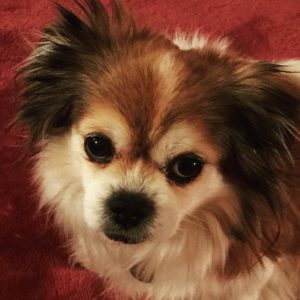 Chloe – also known as Princess or “Prinny” – otherwise known as Squirrel.  Chloe is a sweetie of 12 years vintage, who loves having her photo taken but not in jumpers – she DOES NOT like jumpers at all.

Chloe came into care with Cino who she had spent her whole life with – and when Cino passed suddenly after being with us only 4 days – we decided that Chloe should stay as she had bonded with the Gang and with the Dog Mother, especially. 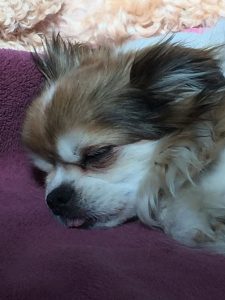 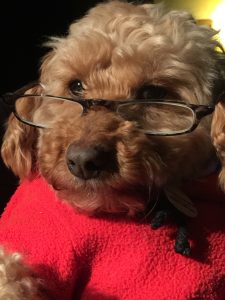 Posie (also known as Cracklin’ Rosie and Wreck It Rosie) is our 8 year old Dancing Dog.  Rosie is my sidekick for School Presentations as she loves having cuddles and attention.  We are going to have her accredited so that she can visit Nursing Homes and Retirement Villages as well.  Rosie dances her way through life – when she’s not busy cuddling!

Rosie has one major fault – she loves birds (and not in a good way). 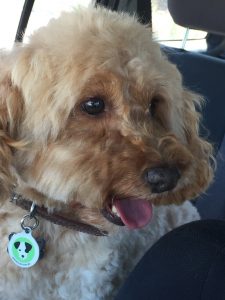 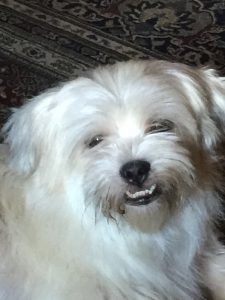 Two Tone Tommy-Tucker.  Tucker is a 4 year old who loves playing soccer.  His ball skills need to be seen to be believed.  He also likes adventure and running around (quite randomly) at times. 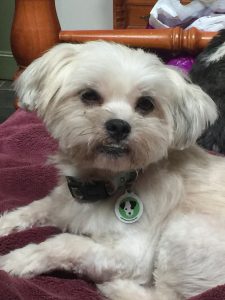 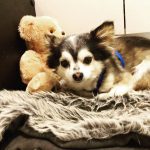 Number 1 Super Guy – He may be small but he is mighty!  He may actually be a German Shepherd or a Siberian Husky trapped in a very small body!  Bonsai loves food, pats and barking at the Emu!  He has us completely wrapped around his little paw and is very spoilt.  He has his own fan-club on social media! 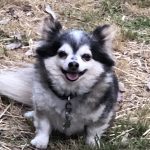