We said Goodbye to our beautiful little Sophie Jane today. Sophie was the first dog we adopted when our Maltese, Ted passed away 10 years ago.

Sophie came from Queensland and we think might have become separated from her previous owner as a result of the major floods that occurred in Queensland then.

She weighed 2.5kg when she arrived and cried the whole of the first night with us.

Although diminutive in stature – Sophie had the largest personality and we called her the Hope Springs Gang Union Rep. because she’d let us know in no uncertain terms if she was not happy.

Sophie was also known as Sophie Jane, Puss, Smurf, Smurfy Murphy, Feral Beryl and Grumble Guts. I promised her today that I’d get on with getting her book ready to go to the printer.

One of the things Sophie particularly enjoyed was chasing the ducks

back in to the creek and she’d often take a big run down the back and then jump on me to express her happiness. Our three seniors were small but the hole they’ve left behind is enormous. 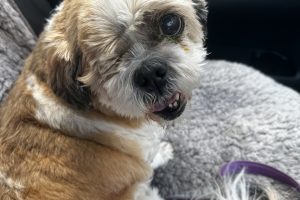 Saffy is a 10 year old Shih Tzu who has just come in to care with us.  She has a few health issues we need to get on top of before she will be ready for adoption.