Mack and George were the first dogs to come through Hope Springs. I adored these boys and they very nearly stayed – except that we wanted them to have a family where ALL the love was for them and we recognised we wouldn’t be able to help as many dogs if we kept them. However, they were here as part of the Gang for 9 months and we adored them.
We found them THE best family with Bec and Jerry who couldn’t have loved them more and we’ve stayed in touch. I always felt a little pang in my heart when I saw photos of them pop up on Facebook.
I was shocked and devastated to hear from Bec that George had suddenly become critically ill. She rushed back from Victoria. George was unresponsive and they had to do the hardest thing. They took Mack to say Goodbye. I keep thinking if I don’t say it – it won’t be true. I so wish it wasn’t true!
George-ous was just that! I’ve included one of his stories from our Hope Springs Gang Gazettes that sums up his fun loving personality. My heart and my thoughts are with Bec and Jerry and Mackie. I have so many photos and the majority have the two boys side by side.
Georgie – maybe at the Rainbow

Bridge you WILL be able to walk on water 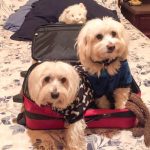 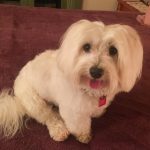 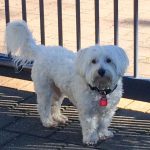 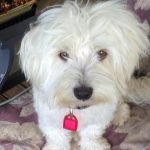 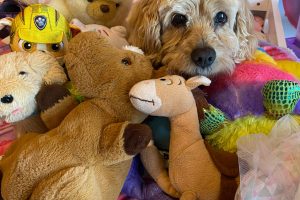 Anna is a 14 year old Cavalier X who came into our care when her owner went into Nursing Care.   She’s a sweet old senior who is deaf and has some arthritis in her hips and back.   Anna would suit someone home a lot who would like a doggy companion. She’s fairly quiet but enjoys a potter around – and the old girl still has some life left in her when it comes… 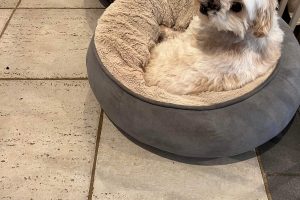 Molly and Scruffy are both 11 years old and have just come into our care at #mylormanor after their Mum sadly passed away. Scruffy has epilepsy controlled with medication and Molly has some seasonal allergy issues. We are still getting to know them both and they are yet to visit our vet for a checkup.