Hey Dude Buddies, it’s George of the Jungle here.  I wanted to tell ya’ ’bout me day out th’ other day with the Dog Muvver and Farver.  We went to some place called Bee-lair.
On the way there, I rode shotgun.  That means I was technically in the back seat but had my front paws on the middle console so I could be part of the action and see everyfin what was goin on up front.  This ushally works pretty good – but there is lots of windin’ road on the way to Bee-lair and I was havin’ a devilish job – hangin on!
Man, we was all so excited when we got there – coz some of us hadn’t been there ‘afore and the others hadn’t been there for quite some time.  We all decided we would bark in unison when Dog Farver was paying the entrance fee to the lady – coz we wan-ned her to know how excited we were.
Dog Muvver din’ look too excited ’bout that!
We set off hikin’ an’ we all roolly liked it – b’coz we hadn’t done this walk before and it was all bran’ new!
After the first loop, we all sat down to have some lunch – an’ us dogs all had roo rolls and lamb crispy crumbles.
When Dog Farver got food for him and Dog Muvver which was cheese and metwurst on crackers, you will not believe what happened next………..!
You know how I just love birds, right…………….?
Well, two of the biggest birds I ever did see – came right up to me – Dog Farver said they wan-ned cheese and metwurst too and maybe they were European Emu’s – tho’ he never came across any a’them a’fore.
Me an Maisie barked and whined and carried on like a pair o prize pork-chops (Dog Muvver said) but those Emus shore weren’ leavin’ wivout metwurst.
Dog Farver said Shoo Shoo to ’em but I fink they just laughed and said “Yeah, Shoo you too!”
After that ‘citement was all over – I needed sumpfin else to do – so I chased butterflies about.  I danced and jumped and fair did a somersault about it and Dog Muvver said “you’re a goose and a ratbag, George of the Jungle”
Then we wen’ on anuvver loop walk and it was shady and cool an Dog Muvver said she liked it better. On the way home, we all were pretty quiet in the car.  Maisie was too tired to get off the floor, Bunny went to sleep on Dog Muvver’s arm and Mackie wen to sleep on Bunny!
I still wan’ned to ride shotgun but I was so tired that I had my bum up in the air and I had to rest my head on the console coz I was pretty worn out.
It was a roolly good day but – ‘an I have d’cided I likes Magpies much better than them Emus.
Seeya Dudes, Fings to do now! 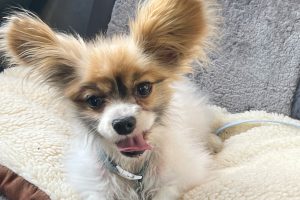 Pepper is a 10 year old Papillon who came into our care when his family had to move interstate to a rental that did not enable them to take him.  He’s a lovely jaunty little chap who spins to show how happy he is! There doesn’t seem to be anything that he doesn’t like. He’s fine with big dogs, fine with small dogs and fine with cats. Loves people and his previous owner is keen…